Intermediate Status for our Footballers! 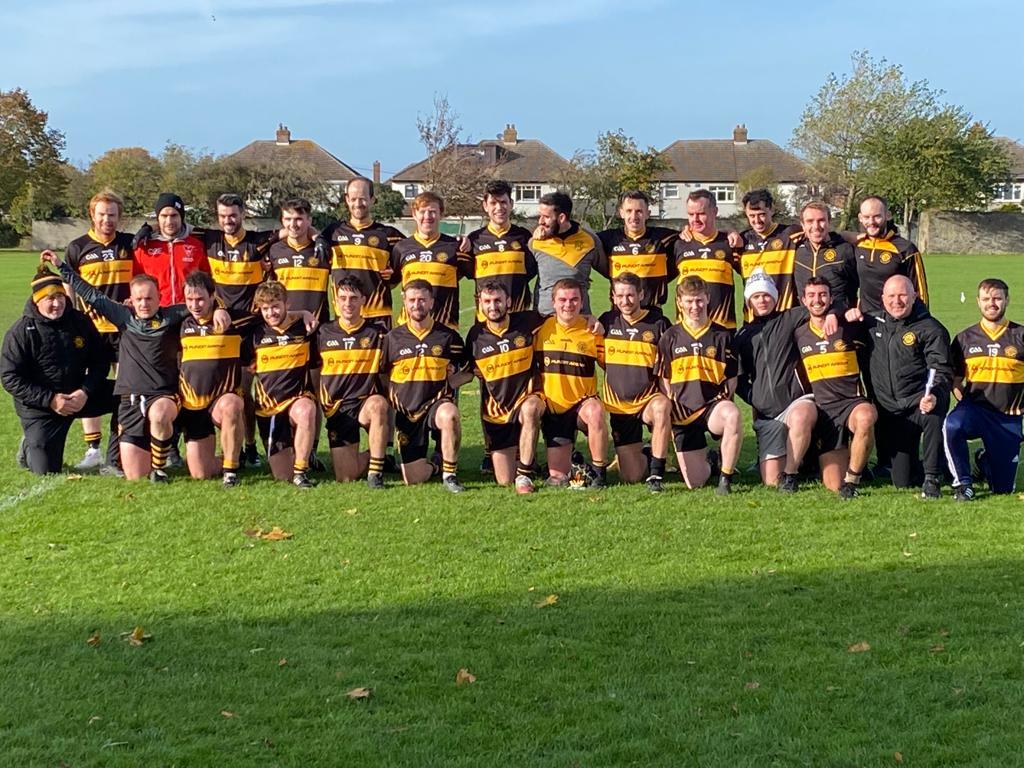 It's been coming a while, but finally today, our Adult Footballers reached the Junior 1 County Championship Final by beating Crumlin CLG in a very tight, tense and fluctuating game.

By qualifying for the final,
Geraldines Patrick Moran GFC leaves the Junior Club ranks and progresses to Intermediate Football.

The Final is set for
SUNDAY 21 NOVEMBER
11.00am Throw In
O'Toole Park, Crumlin.

In a very close but fluctuating game, our footballers dug deep and scraped through by the minimum, 1 point. Having lost at this stage the previous 2 years, there was a lot of pressure on our men but they got through - although it was uncomfortable viewing!

Gers started well enough with the first point of the game but conceded a goal shortly afterwards. The First half water break made a difference and we went in 6 points up at half-time after a very clinical display of football. The second half started exactly the way we didn't want it to, with Crumlin scoring a good point straight from the Throw-in. They kept up the pressure (the wind had picked up slightly) and got back to parity with plenty of time on the clock. Whatever Johnny said at the Second Half Water break worked a treat although it was nip and tuck. Crumlin were level when they had a goal ruled out for a square ball, depriving them of a 3 point lead (to this reporter, who is aware that the Gers Goalie is the Club Secretary's son, it was the correct call).

Within 3 minutes, The Gers were 5 points ahead, a huge swing in the flow of the game. It looked all over but someone forgot to tell Crumlin, who fought their way back to a 1 point deficit before the ref finally (thankfully) blew the whistle after 8 minutes extra time. If it's any consolation to Crumlin, we reckon we'll be seeing them shortly when they join Geraldines Patrick Moran CLG in Intermediate Football, as soon as next year.

While we have been knocking on the door for the last few years, it is perhaps fitting that we finally get promoted to Intermediate Football on the 100th Anniversary of Patrick Moran's death.

It's been some year so far, with a wee bit to go.

The Gers fielded an Adult Hurling Team for the first time in over 45 years.

The Gers fielded a Ladies Football team for the first time ever.

Our U13 girls won the first ever trophy for a Gers Girls Football team.

and our Male Footballers earned Promotion to Intermediate status.

It ain't over yet!

Supporters bus to and from the match available! BOOK HERE!

Please note: Tickets for this Final are expected to be available ONLINE from next Monday 15 November. We expect them to sell at €10.000 for Adults, €5.00 for U16s. Tickets should also be available at the gate - but will be dearer and be CASH ONLY.
We'll put the Ticket link here once it's live.

Congratulations to our U14 Hurler Cian O'Brien on debutin...

With the Club Cúl Camp going live for bookings this morni...

Congratulations to our Ladies Footballers on earning prom...

SUMMER CAMP DATES FOR YOUR DIARYWhile not yet available t...

While the latest Club Lotto draw didn't generate a JACKPO...